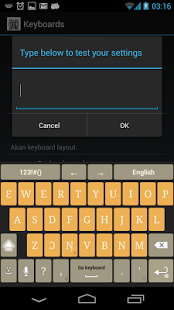 ... a great, free Android app for you type on your phone or tablet in several African languages! - "African Languages" Group, Facebook

Use it as a normal keyboard by simply installing and selecting when you want to type an African language on any Android devices you have.

Download it from Google Play and the Amazon App Store.
It's absolutely FREE!

Express your thoughts and feelings in any of the supported languages.

Brought to you by kasahorow.